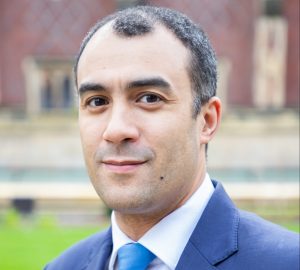 Andrew read law at South Bank University and Queen Mary College, University of London, and was called to the Bar by the Honourable Society of Gray’s Inn (November 2005). He went on to complete an Internship at the British Institute of International & Comparative Law (BIICL) where he contributed to the Bulletin of International Legal Developments (BILD). He accepted a tenancy and became a member of 12 Old Square Chambers (2010).

Andrew has also passed the New York Bar Exam and was admitted to practice as an Attorney and Counselor-at-Law of New York State (2011). He was awarded an MPhil degree (by research) from the University of Hull following his study of International law, NATO and the Use of Force (2015).

Andrew is a member of the ELAAS panel (the Employment Lawyers Appeals Advice Scheme) and performs voluntary advocacy for appellants before the Employment Appeal Tribunal.

Successfully represented a Postman who was found to have been unfairly dismissed for urinating in public; a case widely reported by the national press. See: here, here, here, here, and here

Represented the Respondent to the Secretary of State’s appeal concerning the interpretation of section 117B(6) of the Nationality, Immigration and Asylum Act 2002. The Court of Appeal considered whether s.117B(6) applies only in cases where the qualifying child will in fact leave the UK as a consequence of the parent’s removal; and whether “genuine and subsisting parental relationship” requires at least some element of direct parental care to the child. Reported here

Andrew is the author of numerous peer refereed journal articles, including:

Reports on the topics discussed at the American Bar Association’s Section of International Law 2011 Fall Meeting, held in Dublin from 11-15 October. Including an address by the President of Ireland Mary McAleese on Human Rights and contemporary challenges in Irish culture, Election Dispute Resolution, Privatization of Military and Security Functions, Ireland’s Arbitration Law, the UK Bribery Act, and “Speed Networking.”

Andrew was awarded a scholarship by the Honourable Society of Gray’s Inn to complete the Advanced International Advocacy Course, at Keble College, University of Oxford (2013).

He was a recipient of Scholarship by the South-Eastern Circuit to attend the Florida Bar Advanced Civil Advocacy Course (2011). His publication available here:Transatlantic Advocacy

Andrew is a committee member of the Commonwealth-in-England Barristers’ Association (CEBA), an organisation that exists to promote the rule of law, the independence of the judiciary and the freedom of the legal professions in the Commonwealth. Please see:

He is also a member of the Lawyers’ Christian Fellowship (LCF).

Andrew has completed the 2005 & 2008 Flora London Marathons and raised money for the Disability Law Service. He is married, with a son and daughter, and is a member of the Metropolitan Tabernacle (Baptist) Church in London.