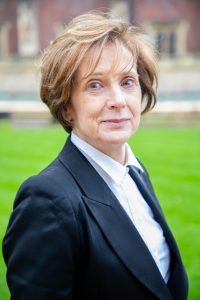 Since being called to the Bar at Lincoln’s Inn in 1980, Angela Delbourgo has acquired a wealth of expertise in a wide variety of legal subjects. From 1980 until 1997 she worked in-house for banks and financial institutions based in the City of London and abroad where her practice concerned mainly company commercial matters, banking and financial services, insolvency, insurance and security matters although in the course of her work also involved dealing with issues of planning, landlord & tenant, employment, road traffic, nuisance, professional negligence and other torts.

From 1998 to 2018 Angela, whilst maintaining a commercial law consultancy, worked mainly as a lecturer at the University of Law where besides teaching company commercial subjects, she taught partnership, EU Law (including immigration aspects) wills and probate as well as assessing skills including oral skills such as advocacy. Since 2012 Angela was one of the University’s UNITE trade union representatives and accordingly she has experience of handling grievances and disciplinary matters as well as other trade union activities involving employment law issues including redundancy.

Since joining chambers in 2018, Angela has given advice in conference and conducted hearings on immigration matters including contested bail applications. She has also had a role in up-dating the chapters dealing with public companies in Tolley’s book on Company Law.

Angela is a member of the Professional Negligence Bar Association as well as a wide variety of arts organisations – she is on the committee of the Chopin Society.

Angela also has a role in up-dating the chapters dealing with public companies in Tolley’s book on Company Law.

A case concerning the retained rights of an ex-spouse of an EEA citizen.  A successful appeal in the Upper Tribunal against the dismissal of the appellant’s appeal by the First Tier Tribunal in Birmingham.  Amos directions for disclosure of the ex-spouse’s HMRC and DWP records – with a cost award.  The decision was ultimately remade by the Upper Tribunal to allow the appellant’s appeal and award her reimbursement of the fee.

Successful application in the Queen’s Bench  to set aside a default judgment in the sum of 58,722,616 pounds.

Successful appeal on human rights grounds in the First Tier Tribunal at Hatton Cross against the refusal of a spousal visa on the ground that the appellant and her sponsor were not in a genuine and subsisting relationship.

Successful application for a possession order and payment of rent arrears in the County Court at Clerkenwell & Shoreditch.

Successful application in the Central London County Court for an extension of time to register a company charge.