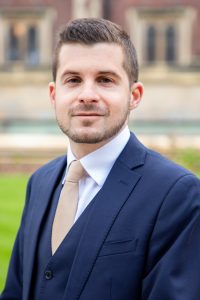 George Mavrantonis was called to the Bar by Gray’s Inn in 2016. He completed pupillage and subsequently joined Chambers in 2019. He specialises in public and administrative law through the sphere of immigration, asylum and nationality law.

To date, George has appeared in more than 700 such trials, for both private clients and the Secretary of State. He has been involved in a number of high profile, public interest and intelligence cases. He maintains a heavy immigration caseload and comes highly recommended for matters of deception, sham marriages, HMRC and DWP discrepancies, out-of-country video-link appeals, PBS, criminal deportation and bails, equally for drafting and representation. George is particularly involved in EU/Brexit and ETS/TOEIC matters.

In asylum law alone, he has had conduct of claims from more than 44 nationalities worldwide which amongst others have included: witches, royalty, publishers, victims of trafficking, children, draft evaders, and politicians. George specialises in LGBTQ+ matters.

He is regularly instructed to draft grounds for judicial review and he specialises in challenges against imminent removal (interim relief).

George has completed marshalling as a pupil at the European Court of Human Rights in 2018. In late 2019 he completed his legal secondment in Strasbourg giving him the appropriate edge in ECtHR process amongst peers of similar Call. He also accepts instructions as a member of the Attorney-General’s “Junior Junior” panel as well as the Secretary of State. He can accept instructions by members of the public where appropriate, as well as solicitors.

Earlier in his career he spent two years at the UK Home Office. He spent one year as a Judicial Review Litigator where he assessed the defensibility of judicial reviews lodged against the Secretary of State. For the next year George appeared as a Presenting Officer concentrating on all human rights and asylum claims, EEA, and entry clearance.

George can be instructed for Rule 39 (interim relief) applications, pre-application review of Rule 47 procedure compliance as well as drafting grounds to the ECtHR.

During his main traineeship at the ECtHR in 2019, George was involved in a number of high profile Strasbourg cases. Amongst others, he has gained expertise specifically on the applicability and merit of Articles 2, 3, 6, 8, 9, 10, 13 and Article 1 (Protocol no. 7) of the Convention.

Permission successfully granted for judicial review in a challenge concerning the appropriate weight to be attached to the APPG and NAO reports in ETS/TOEIC cases.

This ETS case had previously reached the Court of Appeal before it returned to the Upper Tribunal. One of the arguments made was that as a matter of law it is irrelevant whether an Appellant in an ETS human rights appeal has a “weak” or “strong” private life claim. What ought to be accounted for by the Tribunal is a Razgar proportionality exercise under Article 8 ECHR within the sphere of fairness. The appeal was successful, with George Mavrantonis appearing for the Appellant.

“I am grateful to Mr Mavrantonis…because points that are fundamental are sometimes so obvious that the authority for them is forgotten. He relies on a decision going back to 1893 and in particular remarks in a speech of the Lord Chancellor Lord Hershell LC”, wrote Judge Perkins in his judgment setting aside the Appellant’s previous adverse decision and allowing the appeal.

The case concerned a challenge against a decision to deport a Lebanese national. The Appellant had lived in this country for 30 years but had amassed 17 convictions for 30 offences. Relying on OH (Algeria) [2019] EWCA Civ 1763 and in line with AM (Somalia) [2019] EWCA Civ 774, the Tribunal concluded that it was in the public interest to deport the foreign criminal, as per s.32 of the UK Borders Act 2007. George successfully appeared for the Respondent, instructed by the Secretary of State. The Judge referred to George’s “thorough cross-examination and his detailed and focused closing submissions”.

Decision of the First-tier was set aside following grounds of appeal drafted and George’s submissions in the Upper Tribunal.

George successfully appeared for Mr Bhatia in this matter concerning the correct test that ought to be used in ETS/TOEIC deception cases as per SM and Qadir v Secretary of State for the Home Department [2016] EWCA Civ 1167.

Matter involving the distinction between comprehensive sickness insurance (CSI) under the EEA Regulations 2016 and the ruling in Ahmed v The Aire Centre [2014] EWCA Civ 988 in relation to permanent residence for EEA nationals, following a previous unsuccessful appeal in the lower court. George successfully appeared for the Appellant.

George persuaded the Court to depart from a previous adverse determination (Devaseelan) and to allow the appeal by establishing a link between music and political expression in the Congo based on the findings in AB and DM [2005] UKIAT 118.

The Court referred to George’s “helpful skeleton argument” which enabled the Judge to ultimately allow the appeal on grounds of 20-years residence.

A public interest s.32 deportation appeal, which followed the appellant’s earlier unsuccessful application in Draga v. the United Kingdom (app no. 33341/13). The appellant had amassed 8 serious convictions, totaling 13 offences and 4 cautions. The appeal was dismissed and protection status as a refugee has been revoked. George appeared for the Secretary of State.

A challenge against an IS.151A decision and notice of removal. The case concerned the definition of “new matters” (Quaidoo [2018] UKUT 87) where the Appellant relied on a pure human rights case. George successfully appeared for the Appellant with the appeal being allowed on Chikwamba principles.

A matter concerning the correct exemptions to be applied in disabled applicants taking the required English language test for entry clearance applications. George appeared successfully for the four appellants.

The Judge has commended George’s impact: “I was persuaded to adopt Mr Mavrantonis’s insightful views as my own” due to how “very cogently” submissions were made and to “endorse his relevant comments and critique”.

LGBT asylum appeal where George appeared for the State. The Judge referred to George’s strengths in cross-examination: “The couple were subjected to detailed parallel questioning in cross-examination. The questions by Mr Mavrantonis were thorough and designed to test the veracity and substance of the couple’s claimed relationship”.

An entry clearance case where the genuineness of the sponsor’s employment in the United Kingdom was impugned. George proved his case and successfully appeared for both Appellants.

In his free time, George is an amateur photographer and a keen philatelist. He was also a former sergeant in the Army for two years.